Sober Retreat – Penikese: The Place to Be Is Where You Are 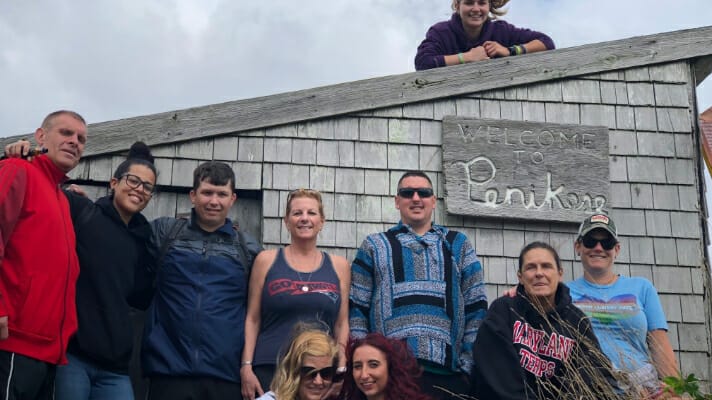 This summer, leadership of the Penikese Island School invited Recovering Champions to conduct a sober retreat on Penikese Island, and after sending out invitations and a bit of planning and packing, eight RCI alumni and three staff headed out to Penikese Island on August 18 for an overnight island adventure.

But wait, what is Penikese anyway? Penikese Island is a small island at the far end of the Elizabeth Island chain that extends southwest from the “armpit” of Cape Cod for 12 miles, ending with the larger and better known Cuttyhunk Island. At 75 acres (depending on the tide) Penikese is among the smallest of the Elizabeth Islands, but features the most fascinating history of them all. Most recently this includes a pioneering school of natural history established by famed naturalist Louis Agassiz in the 1870’s, a leper colony in the early 1900’s, and the Penikese Island School, originally founded in 1973 and in continuous operation until 2011.

Over four decades, the school received widespread acclaim and media coverage for its unique location and philosophy in working with troubled and last-chance adolescents, including national TV. Oh, and the author of this blog just might have been the school’s executive director from 1996 until its closure, and knows a few things about the island, its history and philosophy.

The Penikese Island School was founded during a time of widespread national consciousness, idealism and entrepreneurship, chief among these causes being the deinstitutionalization of adults with chronic mental illness and incarcerated youth. In Massachusetts, many juvenile offenders were bring released from correctional facilities (euphemistically called training schools), and to cope with the demand for alternative treatment, many schools and programs rose to the challenge, Penikese among them.

Since the 1920’s, Penikese Island was under the jurisdiction of what is now called Mass Wildlife, a designated wildlife sanctuary for endangered ground nesting seabirds. But in the 1970’s Penikese Island was unoccupied and largely unmanaged, so Mass Wildlife welcomed the school’s arrival because it would provide a needed island presence and stewardship. But, there were some conditions to accommodate the birds: no lights could be brighter than 40 watts per bulb, and in general the school would have to have as minimal an impact on the island environment as possible.

These conditions were not only quite OK with Penikese’s founding fathers, they went further in that there would be no electricity at all, and all the buildings would be heated with wood stoves and food cooked on a cast-iron wood-fired stove. In general, the idea was this: the school’s rusticity and simplicity would force its students and staff to have to live together in a work- and chore-intensive, interdependent community where everybody’s actions for good or ill would impact the community, and in doing so teach its students work ethic, responsibility, accountability and the true meaning of community. Although Penikese has evolved in a few ways, its foundation remains the same and today light is provided by kerosene lamps and food is still being cooked on the cast iron stove.

It was into this environment that the intrepid alumni and staff arrived at Penikese Island on a sunny Saturday morning, 12 miles from Cape Cod but as if stepping back in time, surrounded by stunning natural beauty and with a ton of work to do! And work we did, unloading the boat, transporting supplies and belongings by hand and tractor from the dock to the house (uphill both ways!), getting belongings up to our bunks and food unpacked in the kitchen, and then firing up the stove to get lunch started.

Once lunch was served and cleared, the fun began with some folks heading out to the wood field to chop wood to cook the dinner, other beginning to prepare the evening meal, and others exploring the island. Can you imagine that we had to describe to a few people what beachcombing was, and that some had never even heard of beach glass? Shocking, but it wasn’t before long that alumni could be seen wandering slowly and meditatively, heads down, occasionally bending to pick up shells (what’s this, Toby? A what, quahog, what is that?), sea glass, fishbones and other nautical bric-a-brac. And before long as it always happens on Penikese, cellphones went ignored, time was forgotten, pockets began bulging with souvenirs and special finds, and landlubber alumni learned about where wampum comes from, the difference between scallop, mussel and jingle shell, how to tell beach glass from a shiny rock, to box a compass and name the neighboring islands, and how to carry as much driftwood as possible without dropping any!

Something about chopping wood and salt air makes for hearty appetites, and dinner did not disappoint, a massive feast of lasagna, bread, salad and apple crisp, with one client, Abbie, only 18, admitting that this was the first time she had eaten anything besides dinosaur chicken nuggets since she could remember! But despite stuffed stomachs the work continued: clearing dinner and washing up, lighting the lanterns, and then gathering for a 12-step meeting in the living room as light faded all around. To the sound of bird cakks and whistling wind, Mark chaired an intimate meeting in which the clients and staff reflected on their recoveries, the hard work and sacrifice that got them as far as they have, and the joys and rewards of recovery they have begun experiencing as a result. As happens the world around, a brief prayer closed the meeting, and then the clients turned to Penikese Part II: night time! Armed with head lamps and fishing rods some struck out for distant rocky shores, others sat on the deck to look at the starry skies and lights on the horizon, and others sat in the living room or at the dining room table to shoot the breeze and tell stories by lamplight, a timeless Penikese pastime.

By day’s end everybody fell into their bunks to sleep the deepest of sleeps. Day two was much the same, and by the retreat’s end those in attendance having worked, played, and explored hard, of having been able to set aside the cares of the mainland world and their everyday lives to take a moment of peace, appreciation and gratitude, and as a group bonded more tightly than before this all began. By Monday as people returned to work the word had gotten around about the Penikese trip and adventures, and with those having made the trip feeling just a bit more special about themselves, spinning tales and showing off pictures to envious onlookers while winking and nodding to others who made the trip, the “club” as it were.

For many years on Penikese above the door to what was called the Forge was a hand-carved sign reading “the place to be is where you are,” a motto meant to remind all people facing life challenges and striving for strength and recovery of the importance of being in the moment, of taking life a day at a time, patience and acceptance. These are long-held values of any self-help tradition and the bulwarks of any successful recovery, and that weekend the healing magic of Penikese Island and hard-working crew of Recovering Champions came together in place and time for an unforgettable retreat experience.

For further reflections on Penikese and the island’s treatment experience and benefits, feel free to read a piece written some time ago: https://tobylineaweaver.wordpress.com/2012/01/13/the-place-to-be/

The Boston Globe also featured our trip to Penikese – Read that article here.