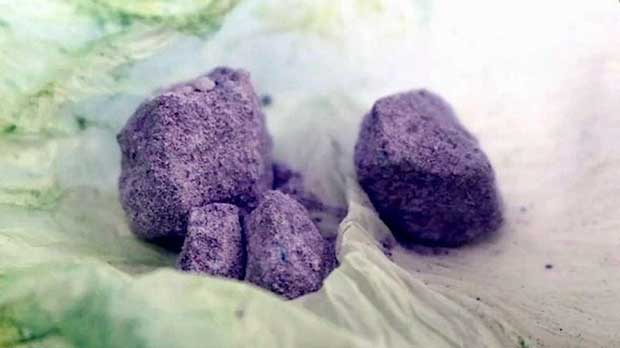 Heroin is among the most dangerous drugs in the world. According to the Centers for Disease Control and Prevention (CDC), over 13,000 Americans died from heroin-related drug overdoses in 2020.

What Is Purple Heroin?

Purple heroin typically comes in powder or crystal from. Although it’s usually purple, it can also be gray.

According to public health officials, purple heroin contains multiple ingredients. These ingredients vary depending on the manufacturer.

However, as the name suggests, all purple heroin contains heroin.

Heroin is a semi-synthetic opioid made from morphine, which is a natural opioid made from the opium poppy plant. Like other opioids, heroin reduces pain and promotes relaxation and euphoria (intense joy). Common side effects include dry mouth, nausea, a heavy feeling in the arms and legs, and warm flushing of the skin.

Other ingredients in purple heroin may include:

Fentanyl is a synthetic opioid prescribed to treat severe cancer pain. According to the CDC, it’s up to 50 times stronger than heroin.

Carfentanil is a synthetic opioid prescribed to sedate elephants and other large animals.It’s not intended for human use. According to the CDC, it’s about 100 times stronger than fentanyl.

Brorphine is a new synthetic opioid that’s structurally similar to fentanyl. It has no accepted medical uses. Because it’s so new, it typically does not appear on standard blood tests.

Acetaminophen is a painkiller and fever reducer. It appears in Tylenol and other over-the-counter medications. Common side effects include headache, nausea, and loss of appetite.

Buspirone is an anti-anxiety medication prescribed under the brand BuSpar. Common side effects include nausea, diarrhea, and dizziness.

However, while Xanax is often prescribed to treat anxiety and panic disorders, flualprazolam has no accepted medical uses. Common side effects include drowsiness, poor memory, and respiratory depression (slow, ineffective breathing).

Niacinamide (also known as nicotinamide) is a form of vitamin B3 that’s prescribed to prevent vitamin B3 deficiency. Common side effects include gas, headache, and rash.

The effects of purple heroin depend on the ingredients. For example, if the drug contains heroin, acetaminophen, and buspirone, you may experience:

In addition, people who use purple heroin face a high risk of overdose and addiction.

An overdose occurs when you use enough purple heroin to cause life-threatening effects. Because most purple heroin contains extremely powerful drugs like fentanyl and carfentanil, even a small amount can cause an overdose.

Also, purple heroin does not produce a homogenous mixture (a mixture in which each part contains the same amount of drugs).

That means one dose of purple heroin may contain far more fentanyl or carfentanil than another dose, even if both doses come from the same batch. In other words, even if your first dose has only mild effects, your second dose could be deadly.

Common symptoms of a purple heroin overdose include:

If you or someone you know experiences these symptoms, call 911 right away. Also, administer naloxone if you have it. Naloxone is a medication that can rapidly reverse the effects of an opioid overdose. You can find it at most pharmacies under the brand name Narcan.

Many of the drugs in purple heroin are highly addictive, including heroin, fentanyl, and carfentanil. That’s why many people who use purple heroin develop substance use disorder (also called drug addiction). This disease makes you feel unable to stop using drugs even if you want to.

One of the most common symptoms of drug addiction is physical dependence. That means your body starts relying on drugs to function normally. If you stop using them, you may experience withdrawal symptoms.

Other signs of drug addiction may include:

If you or someone you love experiences these symptoms, please reach out to a Recovering Champions specialist. Our substance abuse and addiction treatment providers offer mental health counseling, medication-assisted treatment, and a variety of other personalized, evidence-based services.