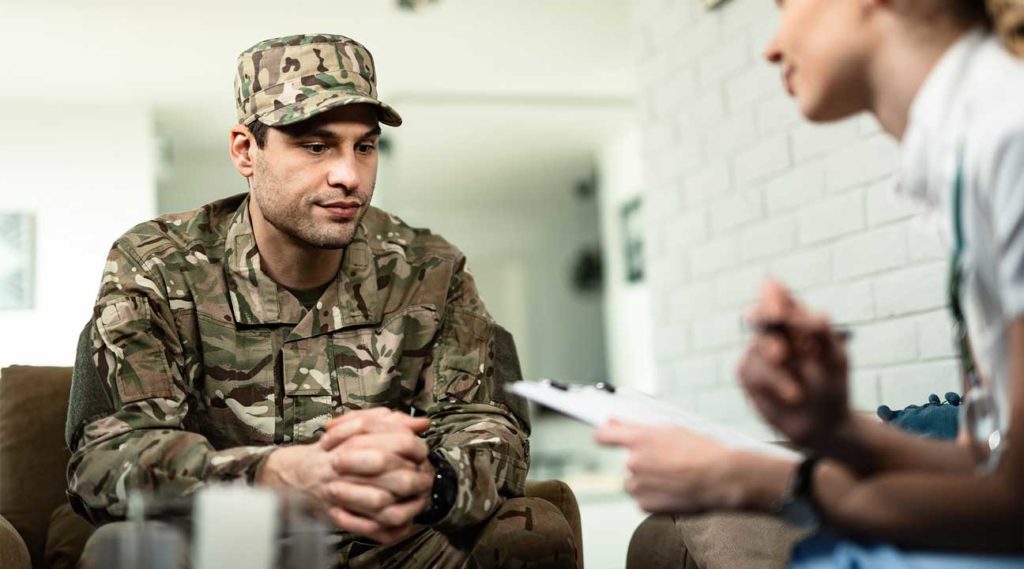 Combat is stressful and involves trauma. For military personnel, war can worsen existing substance abuse issues. They can also create new substance use disorders (SUDs). This is the case when potentially addictive pain medication is prescribed for injuries.

The Department of Veterans Affairs (VA) has taken steps to reduce substance abuse. Unfortunately, the rate of substance use disorders in veterans continues to increase. There’s a zero-tolerance policy for drug use for members of the military.

This means random drug testing is done routinely to make sure no one is using. If someone is found to be using illegal drugs, they are usually disciplined. There’s also testing after treatment if an individual is allowed to return to active duty.

CO-OCCURRING DISORDERS AND CAUSES OF SUBSTANCE ABUSE IN MILITARY VETERANS

Drug use and abuse can be related to other issues. Co-Occurring physical and mental health conditions are not unusual. In the case of military veterans, related conditions include:

The more exposure to combat, the greater the risk of heavy drinking. Former soldiers with multiple deployments can also develop cannabis use disorders. Veterans with a dual diagnosis are more likely to end up homeless.

HOW PREVALENT IS SUBSTANCE ABUSE IN MILITARY VETERANS?

Much of the research on drug use in military veterans is conducted by the VA. However, not all veterans use VA services. As a result, there is an incomplete picture of the extent of substance abuse.

After the 2002 war in Iraq, about 10% of the veterans who came back to the U.S. had substance use issues. Between 2001 and 2009, almost a quarter of veterans in the VA system were prescribed highly addictive drugs such as oxycodone. Opioids prescribed for physical pain or mental health issues have drawn some soldiers into a cycle of dependence.

But alcohol is the drug most commonly misused by veterans. Binge drinking—consuming four to five drinks within an hour or two—is a major problem.

Substance use disorders occur most frequently in unmarried male veterans who are under 25. This demographic makes up a large part of the army. When it comes to young males, substance abuse is more widespread in veterans than in civilians.

PTSD is a condition that affects people who have witnessed or been through life-threatening experiences. These include war conditions, physical or sexual abuse, or any natural or man-made disasters.  Negative symptoms that can interfere with daily life include:

People who have substance abuse issues are more likely to develop PTSD. About a third of veterans getting treatment for SUDs have PTSD as well.

PTSD symptoms should stop or decrease after a few weeks or months. If they continue, treatment is essential. Sometimes, there are no symptoms in the immediate aftermath of the event.

Rather, symptoms begin after a while. A mental health professional can confirm a PTSD diagnosis. Treatment can get rid of the condition or make symptoms manageable.

Left untreated, PTSD can get worse and can make substance use issues worse. A study on the causes of death in male veterans suffering with PTSD found that 30% of suicides were linked to substance use.

A dual diagnosis of PTSD and SUDs is also linked to medical problems. From HIV and liver disease to seizures, there can be many harmful effects on the body.

TREATMENT FOR A DUAL DIAGNOSIS

The military culture places value on mental and physical strength. Veterans are often unwilling to seek treatment because it seems to go against this idea of strength. The Department of Defense Clinical Practice guidelines makes a clear recommendation.

First, there should be “an indication for and a willingness to seek treatment”. Thereafter, a comprehensive evaluation should take place before appropriate treatment is selected.

Doctor-approved medications to lessen cravings and manage withdrawal symptoms are also available. The FDA has not approved medication for cocaine and marijuana use. There are, however, prescription drugs to assist with alcohol and opioid issues. Residential in-patient programs are recommended for supervised detoxes.

Integrated treatment models are ideal. They address a dual diagnosis. They also reduce the shame around “going to rehab” and getting treatment for addiction. Patients visiting integrated facilities could be doing so for anything from general anxiety to grief counseling.

Even if a veteran is an active drug user, they should still be able to access mental health treatment. This treatment could, in turn, help them tackle their substance abuse.

If you or a veteran you know is struggling with substance abuse and/or PTSD, help is available. Treatment facilities are more common in cities. But there are over 3 million rural-based veterans in the VA healthcare system.  Although there are VA medical centers across the country, there may not be one near you. It’s worth exploring other options that are closer.

There are some affordable interventions which take place online or by phone. These methods are useful if you are concerned about the stigma attached to substance abuse in the military. There are certain disadvantages to this type of treatment.

If you live in a rural area, you may struggle to connect to the internet to access remote services. Also, it’s more difficult for the health professional to do random drug tests. These tests are in your best interest.

If you’re a female veteran, group therapy sessions where males are in the majority may be uncomfortable. Some treatment service providers are aware of this and offer programs sensitive to the needs of women.

In addition, find your local Alcoholics Anonymous (AA) or Narcotics Anonymous (NA). These free support groups can supplement treatment and help with accountability to prevent relapses.

The path to long-term recovery can be a long and winding one, but recovery is possible. Peers who have been sober for a substantial amount of time are proof of this. Peer specialists are frequently employed to support veterans since they struggled with PTSD and/or substance abuse, too.

If you’ve tried PTSD treatment before without success, give it another go. Treatment and psychotherapy methods have improved. There’s a good chance you’ll have positive results. This could mean a new lease on life and a future filled with possibility.