How Long Does Lorazepam Stay In Your System? 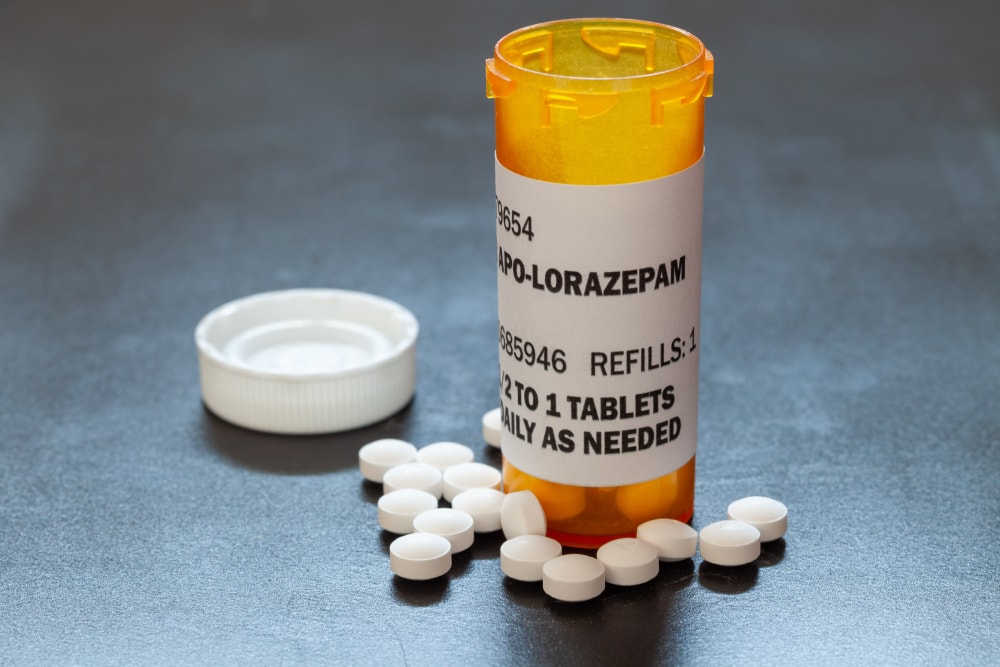 Lorazepam (also known as Ativan) is a sedative drug that belongs to the class of compounds known as benzodiazepines. Much like other benzodiazepines, lorazepam is primarily used to treat both chronic and acute anxiety. However, it is also approved for treating seizures, insomnia, nausea from cancer treatment, inflammation of the inner ear, and drug/alcohol withdrawal.

How Long Does Lorazepam Stay In Your Body?

This depends on a variety of factors, including the type of drug test being administered. For example, some drug tests are more sensitive than others, meaning that they can detect the drug for a longer period of time. Ultimately, there are four types of these tests:

Additionally, let’s quickly go over the important concept of half-life. Essentially, the half-life is the amount of time it takes to break down half of the drug.

For example, lorazepam has a half-life of 12 hours. This means that the human body fully breaks down the drug in about 2.75 days.

Furthermore, its main metabolite has a half-life of approximately 18 hours. Consequently, it takes about 5 days for the human body to get rid of 95% of the lorazepam and its metabolites.

Let’s also quickly go over some relevant terms. First of all, detection window is the amount of time that a chemical can be detected by a drug test. Secondly, clearance rate refers to the rate that the body breaks the drug down.

How Long Does Lorazepam Stay In Lab Tests?

As you can see, these 4 drug tests all have different detection windows. If you were to put them in order, from shortest to longest, it would go like this:

Additionally, there are outside factors that influence the clearance rates of lorazepam, including:

How Long Does Lorazepam Stay In Your Urine?

This method of testing is by far the most common due to how inexpensive it is and how easy it is to use.

That being said, urine tests can usually detect lorazepam for 6 to 9 days after the last use.

However, this detection window may be longer if the user has been taking the drug regularly or at high doses.

How Long Does Lorazepam Stay In Your Hair?

Hair drug tests are not frequently used. This is because they are more expensive and difficult to administer than other tests. However, they do have a particularly long detection window. In fact, a hair test can detect lorazepam for up to 30 days after the last use.

However, hair grows slowly, so there will be no sign of lorazepam for 7 days after it is first used. In other words, it takes a week for the drug to show up in a hair test.

How Long Does Lorazepam Stay In Your Blood?

For a great many people, the idea of having their blood drawn makes them feel light-headed or sick to their stomach. However, blood tests are especially useful in certain cases. In fact, these are the second most commonly used drug test, coming only after urine tests.

That being said, a blood test can detect the drug for up to 3 days after the last use. However, there is a slight delay in this detection window – it takes about 6 hours for it to show up in the user’s blood.

How Long Does Lorazepam Stay In Your Saliva?

A saliva drug test is the rarest type of drug test used to detect lorazepam in the user’s system. This is because they are both expensive and have a particularly short detection window. For example, a saliva test can detect lorazepam only about 8 hours after the last use.

Despite being used to treat so many different conditions, lorazepam is also very addictive. Furthermore, this particular drug causes both psychological and physical addiction.

In fact, if you take lorazepam regularly and then suddenly stop taking it, you will likely suffer from serious withdrawal symptoms. In some cases, these symptoms can even be fatal.  That means that you should quit taking lorazepam under the care of a health professional.

Furthermore, the signs of addiction include:

If any of these apply to you, then you may be suffering from an addiction to lorazepam. That being said, this is a serious condition that requires comprehensive treatment. You don’t have to fight this battle alone, so call Recovering Champions right away to learn more about rehab and treatment!