How Long Does LSD Stay in Your System? 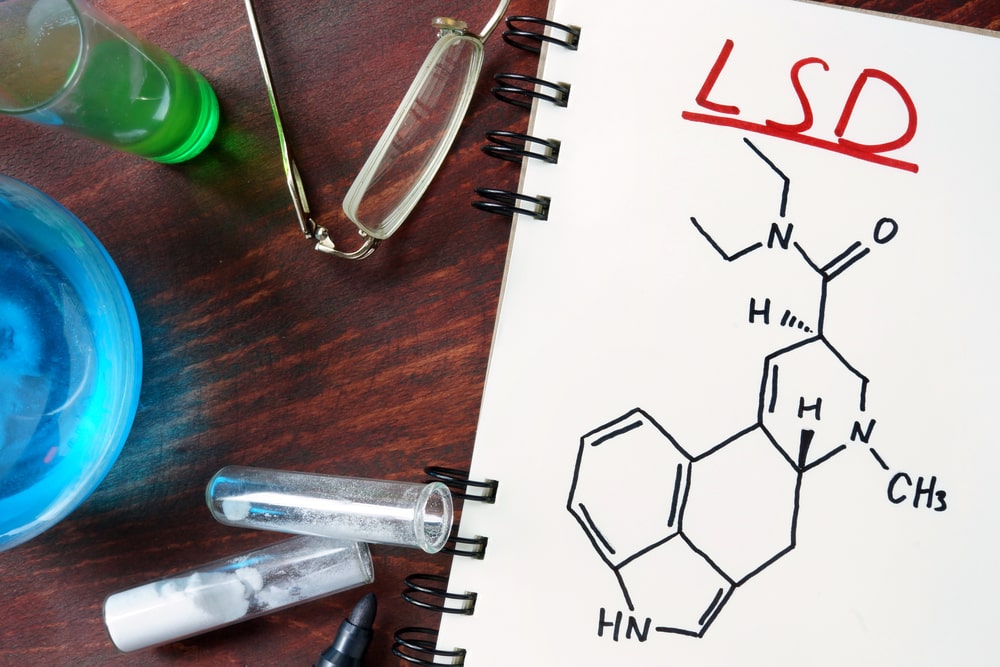 Also known as acid or LSD, lysergic acid diethylamide is a psychedelic drug made from chemicals that occur naturally in funguses from the ergot family.

People take LSD to have a “trip”—a psychedelic experience that can include mind and brain effects such as:

If you use LSD, you may wonder how long it lasts and how long it can show up on a drug screening.

Here’s what you need to know about how long LSD stays in your body:

How Your System Processes LSD

LSD is most often taken transmucosally or through the mucous membranes in the mouth. It comes in the form of a small paper blotter or tab, which the user puts under the tongue to dissolve.

When the LSD dissolves into the tissues in your mouth, it enters your bloodstream and begins to cause effects. This typically takes 30 to 60 minutes.

During an acid trip, you may experience visual hallucinations, including:

After the effects begin, the duration of the trip depends on the dosage. Most acid trips last anywhere from six to 12 hours.

How Long Does LSD Stay in Lab Tests?

LSD has a half-life of five hours, so it takes that long for your body to remove half of a dose from your system. However, that doesn’t mean that LSD is undetectable after 10 hours.

The length of time that acid can be detected depends on factors such as:

Researchers have developed methods to detect LSD use, but as of 2019, they aren’t currently in commercial use.

Legal departments can order the use of specialized drug tests if they suspect that you’re using LSD, but the drug isn’t currently part of 5- or 10-panel drug tests.

How Long Does LSD Stay in Your Urine?

Your liver is very efficient at transforming LSD into other compounds called metabolites.

Most current research checks for LSD itself rather than metabolites, and only 1% of LSD that you take exits your body as part of urine after 24 hours. The rest of it exits the body as metabolites, which aren’t detected in many testing procedures.

As of 2019, there aren’t any commercial urine tests for LSD—but it’s possible to detect the substance using private research methods.

How Long Does LSD Stay in Your Hair?

Researchers haven’t been able to detect LSD in the hair reliably. In theory, the drug could possibly be detected for up to 90 days.

As of 2019, there are no commercial hair tests for LSD, and no research procedure that’s easy to use to detect LSD in the hair.

How Long Does LSD Stay in Your Blood?

While there aren’t any commercial blood tests for LSD on the market, research teams have been able to detect LSD in blood samples for 16 hours after drug use.

For most drugs, blood testing is an ineffective method of detection because it doesn’t work for very long.

Because the length of a trip can be longer than 12 hours, it’s possible that blood testing could fail to detect LSD once you’re no longer tripping.

How Long Does LSD Stay in Your Saliva?

Saliva tests don’t reliably produce positive results for most psychedelic drugs, and LSD is no exception.

As of 2019, there are no commercial tests or research procedures for LSD saliva testing.

Saliva tests can usually detect drug use for the same length of time as a blood sample, but it’s hard to say for sure with acid.

How To Detox From LSD Faster

Your body detoxes from LSD at its own rate and that rate is not the same for everyone.

You may be able to give yourself a better detox by staying hydrated, eating enough, sleeping well, and avoiding drug use—but there’s not much you can do to take detox into your own hands.

The first 24 hours after taking LSD can be difficult because it’s common to experience fatigue and depression after a trip. Instead of fasting or taking detox supplements, focus on taking care of your body and mind.

If you take other drugs alongside LSD, you could be at risk for multi-substance abuse disorder and other health effects. Don’t be afraid to seek treatment—the effects of mixing drugs can be lethal.

Get Treatment For Drug Abuse

If you’re worried about testing positive for LSD, then you could have a problem on your hands.

It’s true that most psychedelic drugs (including acid) don’t cause physical dependence—but they can still cause psychological addiction, especially when combined with other substances.

A drug treatment center can provide a supportive environment and high-quality medical and psychological care, setting the stage for a successful recovery. Call Recovering Champions today to take the first step!