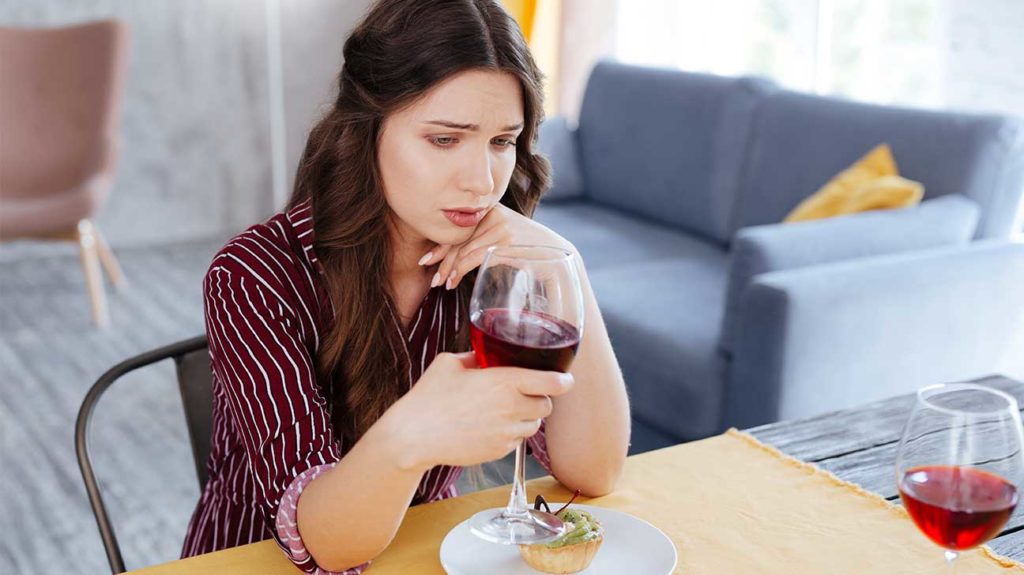 Drinking heavy amounts of alcohol while engaging in disordered eating behaviors — such as food restriction, bingeing, or purging — can be very harmful to physical and mental health. In recent years, this phenomenon has been described as “drunkorexia” and is most often seen in college-aged young adults.

The most common eating disorders include:

Behind opioid addiction, eating disorders have the highest mortality rate of any mental illness in the United States. Learning more about warning signs of drunkorexic behaviors in young people, and when it might be time to get help, can be life-saving.

Drunkorexia is a colloquial term that is used to describe co-occurring restrictive eating behaviors, as seen with anorexia, and heavy drinking. Most often, this describes restricting how much you eat before drinking, typically for weight-control purposes.

The term ‘drunkorexia’ has been popularized largely due to the frequency of these behaviors in college-age women. Female college students often report feeling significant pressure to avoid the weight gain commonly associated with heavy alcohol use in college.

Warning signs of drunkorexia may include:

Drunkorexia is not an official eating disorder diagnosis. However, it’s a term that’s easily able to capture the experience of simultaneously struggling with alcohol abuse and anorexia.

Side Effects And Dangers Of Drunkorexia

Side effects and dangers may include:

Both alcohol use and low caloric intake can have effects physically, mentally, and psychologically. Without proper nutrition, you may struggle to concentrate, suffer mood swings, and have difficulty attending to everyday tasks and responsibilities. This can affect your relationships, your studies, and completely disrupt the way you function in your day-to-day life.

Drinking alcoholic beverages while malnourished can put you at a high risk for nutritional deficiencies. Alcohol abuse alone can deplete the body of essential nutrients, causing fatigue, brittle hair and nails, changes in your sex drive, and electrolyte imbalances.

These health problems can become even more severe when you’re eating too little or purging what food you do take in. The medical and psychological complications of binge drinking and disordered eating patterns are well-documented.

Without treatment, the side effects of drunkorexia can become worse over time. And the longer you struggle, the more difficult it’s going to be to normalize your eating and drinking habits.

Eating disorders and substance abuse carry severe health risks that can become life-threatening without treatment. Both conditions can lead to organ damage, heart complications, and increased risk for suicide.

Binge drinking can also lead to alcohol addiction. This can make it difficult to cut down on your drinking, which may perpetuate a dangerous cycle of heavy drinking and disordered eating.

How Common Is Alcohol Abuse Among People With Eating Disorders?

Alcohol is one of several substances that is commonly abused by people with eating disorders, in addition to caffeine, amphetamines, laxatives, and illegal drugs like cocaine and heroin.

According to NEDA, estimated percentages of people with eating disorders who abuse substances like alcohol include:

Alcohol abuse is more common among people with bulimia and binge eating disorder. In addition, a high percentage of people who are first diagnosed with anorexia develop bulimic behaviors over time. This can cause significant psychological stress and may increase the risk of turning to addictive substances to cope with changes in eating habits and other life stressors.

Skipping meals or overexercising to offset the calories you take in through alcohol is dangerous. This can lead to alcohol dependence and the development of an eating disorder.

Depending on the type of eating disorder, signs may include:

Seeking help for these issues can be intimidating. Most people don’t like to admit that they’ve lost control over their drinking or their eating habits. It can also be difficult to relinquish control over these things by asking for professional help.

If you or someone you know appears to be struggling with ‘drunkorexia,’ seeking help from a mental health or medical professional is highly recommended. If you’re a college student, this may include talking to a counselor or general physician on campus who can perform a clinical evaluation and refer you to appropriate treatment.

At Recovering Champions, we understand that the COVID-19 pandemic has posed unique challenges for people with eating disorders. If you’re a Massachusetts resident who’s ready to get help for drunkorexia, don’t wait to seek help.

Call us today to learn more about our outpatient dual diagnosis treatment options for eating disorders and substance abuse in Massachusetts.