Home › Alcohol Abuse & Addiction | Signs, Symptoms, & Treatment › Can an Alcoholic Ever Have a Drink?

Can an Alcoholic Ever Have a Drink? 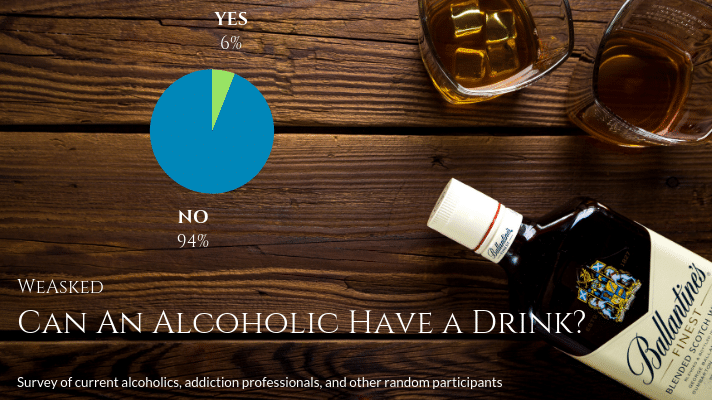 For an alcoholic, some of the most enjoyable, most human social activities can be sad, depressing affairs. That’s because so many of these activities involve alcohol and drinking. These activities can be family get togethers, retirement parties, weddings, or even simple dinners out. While others enjoy their affairs with cocktails in hand, it can be very tempting for the alcoholic to ask, “Can I ever drink again?”

Alcoholism As A Disease

Alcohol Use Disorder (AUD) is a diagnosable medical condition, according to the National Institute on Alcohol Abuse and Alcoholism (NIH). The most commonly known of these disorders, alcoholism, carries symptoms such as:

For much of human existence, alcohol addiction has been considered a matter of moral failing, and addicts were shunned by society as sinners, or even imprisoned. Groups like Alcoholics Anonymous (AA, formed in 1935) and the Center of Alcohol Studies at Yale Medical School (after hiring E.M. Jellinek as its director in 1940) worked hard to change this perspective. Jellinek, in particular, played a vital role in the identification of alcoholism as a disease. For Jellinek and his colleagues, medical treatment, not criminal punishment, was the correct prescription.

Social Drinking, And When It Becomes A Problem

Social drinking becomes “problem” drinking when volume exceeds these thresholds. According to the NIH, most Americans experience a single period of problem drinking during their lives, and that period usually occurs between the ages of 18 and 24 (typically the college years). For the vast majority of people, self-correction is possible, as adults fight to avoid the consequences of short-term alcohol abuse, such as: stomach issues, hangovers, missing work, car accidents, or embarrassing social situations.

Alcoholism is defined by the inability to curb alcohol abuse, despite these often escalating consequences of drinking.

Abstinence-based treatment was developed from the teachings of Alcoholics Anonymous (AA), and became widely adopted outside of AA by the 1970s. More than 95% of drug and alcohol addiction treatment programs in the United States are abstinence-based.

Alcoholism is a disease, for which there is no cure, and is caused by lifelong physiological, social, and psychological disease processes. Abstinence-based treatment philosophy states that if addiction is a disease, the person suffering from the disease is ‘powerless’ over the use of alcohol. Abstinence is the only solution.

There are alternatives to abstinence-based treatment methodologies. One of these alternatives is known as harm reduction. In a harm reduction program, addicts attempt to lower consumption of alcohol, while taking part in behavioral and spiritual therapies similar to those utilized in abstinence-based approaches. Popularized in Europe, harm reduction methodology is partially responsible for some of the more successful medication assisted treatments used to treat heroin and other opioid addictions.

Still, harm reduction as a theory of treatment is not considered effective over the long term in the United States. One of the reasons that harm reduction lost momentum in this country has to do with the circumstances surrounding one of its key proponents, Audrey Kishline, Kishline herself, could not cope with her own moderate drinking, and ended up killing a mother and her child in a drunk driving accident.

What Do Real People Think?

We conducted our own survey of current and former alcoholics, treatment professionals, and other US citizens, and, almost universally, these participants do not believe an alcoholic can have a drink.

A frequent concern of our survey participants was the risk of relapse. Years of sobriety can be threatened by just one drink. But, it’s not the one drink that’s the problem. The problem is that one drink for an alcoholic is likely to lead to a second, and then a third. As one participant noted: “One drink is never ‘one drink.’”

Do The Benefits Outweigh The Risks?  Should An Alcoholic Try Drinking Again?

Alcohol is a dangerous substance. It is a poison that can damage parts of the body and brain. When consumed for pleasure, it can ease tensions, and open up a person to more social interaction. But, because the effects of alcohol can be difficult to control, even one night of drinking can lead to horrible consequences.

The question for an alcoholic needs to be: “Do the benefits of one more enjoyable evening outweigh the risks of not only social embarrassment, but other potentially dangerous consequences or relapse?”

The answer to that question for an addict in recovery should be ‘No.’

It’s important to add that recovery is a life-long journey, and that relapse is a part of that journey for the vast majority of those battling addiction. The relapse rate for an alcoholic may be as high as 90%. Relapse can be seen as a moment for learning and reflection. Lessons learned during relapse can lead to a more sustainable recovery lifestyle going forward.

But even though relapse is not the end of recovery, it should be avoided where possible. Given a choice to drink socially or abstain completely, abstinence is the only choice for an alcoholic.

If you, or a loved one, are battling alcohol addiction, we can help! Our evidence based program includes spiritual support, and includes 12-step counseling.